with empty eyes i watch 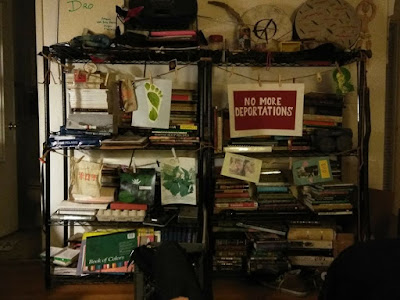 even the sacramento river became still

with empty eyes i watch

waiting for the river to flow once again

silence is my only balm

a mother and father with their child on a leash

dirty windows on an old house that needs repair

as muddy as my life

widens across a flat lowland

and my life widens as well

from this creek i emerge

I dreamed I was in a house in England, where one corner of one small room was in France. This room had a table where wealthy French people met and ate, and one little door that let out into France. In the English part of the house, no one liked me, for I was Welsh. They weren't mean, just cold and standoffish. Perhaps the French would like me, they kept saying. So I went into the French room, and they did like me! They loved me! They gave me ancient books written in script that seemed flowing and lovely. There was laughter, fine dining and music, and when it was time to go, they led me to the small doorway into France, not back to England. I walked into a rolling, sunny countryside of grapes. Suddenly, I could sing in French.

Do your little bit of good where you are; it's those little bits of good put together that overwhelm the world.

There is no such thing as paranoia. Your worst fears can come true at any moment.

Maybe this body is a jail cell; have you ever considered that?

We have within us the seeds of despair, of anger, but we also have the seeds of compassion, awakening, Buddha-nature, and mindfulness.